Dear Sponsors, Donors and Friends of Helping Children in Crisis,

It has been a while since our last update and we apologize for the long silence.  Please bear with this lengthy report as we bring you up to date on our recent work to support 34 orphans in Etora, Kenya. A group of us from the Executive Committee just came back from a trip there and our hearts are full after seeing the children and young adults.  They are doing well and thriving.  They send their love to everyone.  Many of them stand at the brink of adulthood and look eagerly to their future. They know they wouldn’t be where they are today without your love and support and they are grateful for it.

Over the past year there have been several allegations as to the integrity of the work being done on the ground by the General Church Sacred Care (GCSC) in Kenya.  In general these allegations fell into three categories:

The HCIC executive committee felt we needed to send a group of people over there to do due diligence.  The group that went included: David Lindrooth (Outreach), Kay Alden (HCIC Chair), Roger Schrock (HCIC treasurer), Kathy Schrock (HCIC Vocational/Sponsorship Officer) and John Wille (HCIC Oversight Officer) . We also had the help of a trusted Kenyan driver, David Kimani. David K. provided a valuable independent, perspective on Kenyan customs and policies. We had limited time to be there and needed a group large enough that we could divide up to address the issues we wanted to address in the short time we had to be there. Prior to our visit we asked for the GCSC staff to provide official documentation that addressed the concerns.  Most of the needed documents were available on our arrival and the ones that weren’t were provided later.

Happily it was quickly apparent that there was no need for concern on any of the issues.  The General Church has recently hired a professional accountant, Evans Mayaka, to keep the books for the Church and GCSC.  Roger and John met with Evans the first day we were there and he had nothing but good things to say. He found the staff at the church and orphanage honest, willing, cooperative and extremely grateful for the help he was providing.  Evans is looking forward to working with the staff there and creating a transparent ledger that can be shared via email to stakeholders in the US.

While we were there we purchased Petty Cash receipt books to use for recording purchases at vendors.  Documenting the kinds of purchasing they do on an everyday basis is one of our biggest challenges.  Technology has reached Kenya and another tool that is used even by simple Kenyan vendors is a way to make purchases with a cell phone called M-PESA.  These purchases create recordable records and while we were there we set them up with the needed tools to use on a regular basis.  Each purchase does require a fee so we are trying it for a few months to see if the fees are worth it.

Background and Legal Standing of Children

HCIC hires Samson’s daughter, Dorothy Mogusu, as our Liaison.  She provided us with authentic documentation of legal guardianship of all the children, official government recognition of the General Church Sacred Care organization, recent tuition receipts, documentation of young adults currently enrolled in vocational programs, recent grades for the children as well as letters the children have recently written to their sponsors.

The GCSC does not use the word “Orphanage” in their name and signage because it would be seen as a separate entity from the church and thus subject to more taxation.  It is recognized by the government to be an entity of school/church.  Also if it used the word “orphanage” in its title it would mean that people would continue to drop off orphans at Samson’s church.  HCIC’s intention is not support an on-going orphanage but to see our current 34 children into a position to be functioning adults.

Samson recently took on a part time elected position.  There was an allegation that no one in Kenya can hold an elected position without being corrupt. If you have ever had dealings with the Kenyan government one could see how this might be true.

Samson was approached by his local elders to be their ward’s MCA (Member of County Assembly).  His full title for this position is Kisii County Assembly Protocol Officer.  People in Kenya cannot go directly to the government with concerns but must go through an MCA.  Their ward had an official who did nothing for them and they were looking for someone with integrity.  They knew of Samson’s good work with the church, the children and how he conducted himself and wanted him to be their MCA.  Samson said he needed to talk to his wife.  He consulted with Jackline (he says he makes no important decision without consulting her and truly this seems to be what happens) and she thought it would be a good idea as long as it didn’t get in the way of his “good work as a pastor”.  He might be able to get more done with a voice in the government.  At first he told the elders “no” that they should try someone else but they kept coming back.  He finally agreed.  It was an uncontested election without any campaigning.  He gave the condition that he could never do something on Sundays because his first duty was to preach.  He also asked the people in the community to come to his church, many of them do, traveling a distance to do so. His is not a salaried position.  He gets paid per diem for meetings that primarily happen on Tuesdays and Thursdays. All in the group felt that Samson’s governmental position has the potential to help the church and that he is a good example to others of a person who is living the doctrines of the New Church while still serving a government that is known to be riddled with corruption.  Samson says he likes the idea of bringing New Church spirituality to the government.  It needs it!

Other Issues to Note

It should be noted that Samson’s school, The Good News Preparatory School continues to do impressive work.  We reviewed documents that showed his school consistently ranks number one in a district of over 30 schools.  Also looking at the students who rank in the top five in each subject, students from Good News Preparatory School students can consistently be found on the list.  When asked what he attributed such success to Samson smiled and said, “We know how to teach with love here.”  This kind of consistent success is remarkable and can be capitalized on.

There is a hole in the ground well on the back property that is used for washing.  The children go to a spring to fetch drinking water.  We are concerned that a child could easily fall down the well, as it is only covered by a scrap of metal siding.  We talked to some international water specialists who were staying at the same hotel with us and they said all the water in the area, even the spring water, is contaminated.  They gave us suggestions on how to make a hinged cap for the well that would make it safer and suggested a relatively inexpensive filter system that would make any water safe to drink. We hope to address this issue in the coming months.

The trip over there was a huge success.  We actually appreciated that concerns were expressed so that we could go over there and verify that things are actually going even better than we hoped. It is very difficult to actually understand what is going on over there via email and/or phone calls. English as a second language and foreign accents can get in the way of clear communication. Actual trips over to talk in person are absolutely necessary for a complete understanding and for us to achieve the level of transparency and accountability that we require.

Samson and his family live far away from the church property and have no electricity or running water where they live.  There is no electricity (or running water) on the church property. It is difficult for them to keep phones and computer charged under these circumstances.  They have to run an expensive generator late at night to charge their devices.  They are old devices and don’t have much battery life so they often keep them turned off to save power. For this reason HCIC has made it a priority to bring electricity to the church/school/orphanage grounds.   The buildings are already wired, it is just a matter of bringing the electricity to the site. We have asked Samson and Dorothy to find out how much it would cost to have this done.  The ball is in their court before we can move forward.  We need to know the price and then will actively fund raise to cover it. Our accountant, Evans, will verify if the price is reasonable once we get it. This has been a big issue for us in the past – verifying bids. Ones we have received in the past for big projects have seemed to be vastly inflated.  Having Evans to verify will be a big help.

If any of you would like to donate to this capital campaign your help would be greatly appreciated.  Donation can be made on our website helpingchildrenincrisis.com or checks made out to the “General Church” and ear marked “HCIC capital campaign” can be mailed to HCIC %Kay Alden, PO Box 204, Bryn Athyn, PA 19009

As we were making our way across the long stretch of the Great Rift Valley to get to the church, we confided in David Kimani, our driver, the scope of our mission.  We told him that we were there to figure out if we were doing a good job or not.  He wisely advised us to look at our outcomes. “How are the kids turning out when they leave?”

We haven’t had many matriculate out yet but those who have are thriving.

Winny scored in the top 1% and has a free ride to University. Kevin has been trained and is teaching in Samson’s school.  Benjamin went to live in a friend’s village and got a job.  They are doing great!  Everything we hoped for.

This fact was driven home another time when we first stopped to see Hesbon, a 17 year old orphan, who is working at a garage training to be a mechanic.  He stood in his blue overalls beaming with pride to Roger and Kathy, his sponsors. His face held a brilliant smile. He eagerly told them that he was happy and liked it there.  He lives in an apartment with another orphan, Evans. They make their own meals.  He is learning how to be independent while lovingly supported by Samson’s family. They visit every week.  Bring him food.  Talk on the phone.  Hesbon comes to church every Sunday and helps with the sound system. When he comes to the church property he greets the younger ones like brothers and sister.  On paper these children are “orphans”, but in reality they are Samson and Jackline’s children. 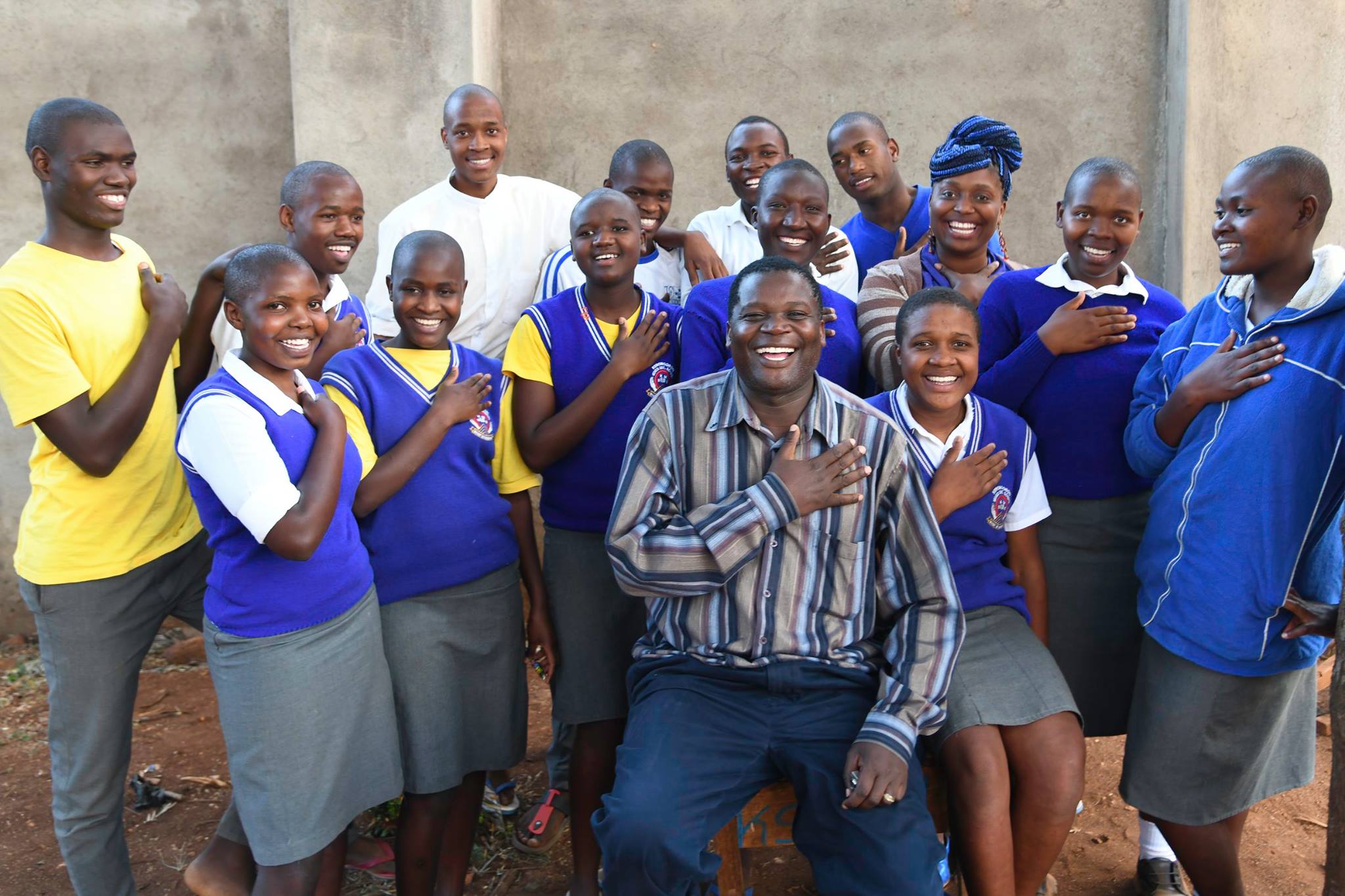